This was reported by Volodymyr Klepach, the Director of the Pyriatyn Elevator Branch of Baryshivska Grain Company Grain Alliance. At present, the company accepts corn from the farms of production clusters of the company – Poltava and Chernihiv. 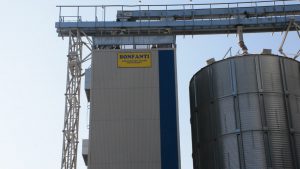 The elevator has three points of grain acceptance from vehicles, through which it can accept 2-3 thousand tons daily, including 3 different crops at a time. At the acceptance points there are dryers Bonfanti – the first two with a capacity of 500 tons per day are powered by natural gas, and the third, the largest, has a capacity of 750+ tons per day and runs on biofuel.

At the third point of reception, the Bonfanti drying complex with a heat generator runs on alternative fuel – grain residuals. This season 30,000 tons of grain have been received and dried here. The dryer is of Italian production, and the heat generator is domestic. They work energy-efficiently, economically and on biofuel,which is an environmentally friendly energy carrier, – says Volodymyr Ovdienko, a grain processing engineer at the Pyriatyn Elevator Branch.

– Improving energy efficiency is one of the priorities of the BZK Grain Alliance, – added Tahir Musayev, Chief Commercial Officer of the Company.