How can Ukraine solve the logistics crisis and thereby increase the export of grain? A question on which food security in the world depends and the solution of which all civilized countries are interested in. The participants of the round table, which was initiated by the Embassy of Sweden in Ukraine, sought an answer to this question.

The event was held in Bratislava (Slovakia) on September 19, and gathered a high-level delegation from the governments and other authorities of Ukraine and Slovakia, representatives of agrobusiness. “The topic being discussed is extremely important, because it is only the transportation of grain by sea in conditions of war that does not allow to solve the problem,” – admits the Minister of Agricultural Policy and Food of Ukraine, Mykola Solskyi.

Mykola Solskyi, Minister of Agricultural Policy and Food of Ukraine:

“Transport grain routes to Europe should become permanent. Today, we cannot be sure of our Black Sea ports given the fact that Russia remains our permanent neighbor and the threat from this side remains constant. Today, Ukraine has about 24,000 grain wagons. There are approximately 12,000 grain trucks in all of Europe. That is why we propose to the members of the European Union to subsidize European enterprises that produce wagons. In particular, we will talk about this topic during the official meeting of agricultural ministers of European countries, which will take place on September 26 in Brussels.”

At the same time, the government official noted one of the first experiences of Ukrainian agrobusiness in the organization of uninterrupted transshipment of grain through elevators in Europe. We are talking about the grain storage of the Baryshivska Grain Company in the city of Černa nad Tyso (Slovakia), through which a large volume of grain was transshipped in a few months. 88 grain trucks of the wagon fleet, which the enterprise currently has, also came in handy here. 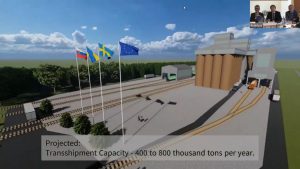 “Ukraine is very grateful for the comprehensive humanitarian, military and financial support of the European Union and its members in this difficult time. But is our business looking for opportunities to attract additional investments from the EU? I would say no. Our investors and partners, such as the EBRD, are ready to invest in the development of logistics routes that do not depend on the weather or other factors. We, our experts, have proven that there are no obstacles for us that cannot be overcome. You know that we have purchased an elevator that has not been in operation for 8 years. But thanks to our efforts, it already accepted the first grain on June 20 and continues to work successfully, gradually increasing the rate of transshipment. During this period, we managed to transship about 70,000 tons of grain to Europe. This implemented project is beneficial not only for us, for Ukraine. In particular, we have already paid 3 million euros of taxes in Slovakia.”

How to help such initiatives develop faster? Representatives of Slovakian authorities joined the discussion of this issue, in particular, the mayor of Černa nad Tysoy Marta Vozarikova and the state secretary of the Ministry of Foreign and European Affairs of Slovakia Ingrid Brokova. In particular, they discussed promoting the capacity expansion of the elevator, on which two new silos are going to be installed. “The meeting will contribute to solving the problems of grain export from Ukraine, which the world suffers from,” – summed up the results of the meeting, Sweden’s Ambassador to Ukraine Tobias Tyberg. 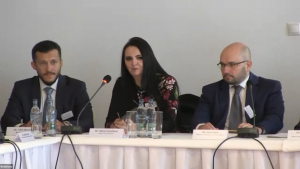 “I am very proud that not only Sweden, but also Swedish business is making efforts to help Ukrainian society resist Russian aggression and support the development and survival of Ukrainian business. I think we all have a lot to do for this. I thank the organizers of this event for inviting me and I wish everyone good luck.”

The elevator in Černa nad Tysoy is a project in the implementation of which the Ukrainian agrobusiness should be interested in a broad sense. The management of the Baryshivska grain company reported that after establishing an uninterrupted route to the new elevator by the Ukrainian railway, the unit will help other Ukrainian farmers transport grain to Europe. 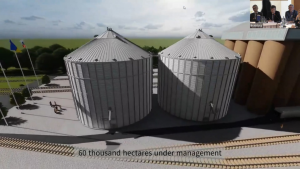