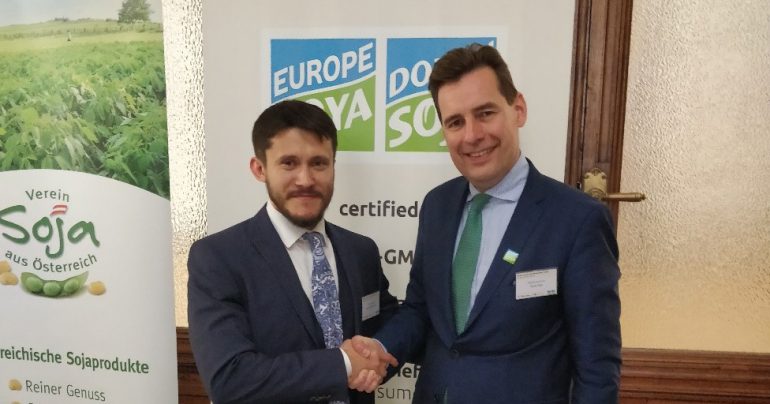 On April the 19th, the General Assembly of the participants of the European Danube Soybean Association “Donau Soja”, took place in Vienna, Austria. According to the statement of the association, “Donau Soja” currently has a political support in 15 European countries.

One of the main missions of the Association is to protect producers of organic non-GMO soybeans, promoting their interests on the European markets. Grain Alliance is an active member of the Association. The company remains one of the first in Ukraine to join the Association. “This season Grain Alliance plans to sow more than 10 thousand hectares of soy. Today there are a lot of questions about the terms of export from Ukraine for soy. Hence it is absolutely natural that our long-standing ties with international agro-associations considerably simplify the arrival of Ukrainian soybeans to European markets. During the meeting, we met with the head of the Association, Matias Kron, and discussed a number of specific cooperation programs. We are ready to become a portal through which domestic Ukrainian soybeans will get to Europe on the most optimal terms both for Ukrainian farmers and for the European end-users”- said Tahir Musayev, Chief Commercial Officer of Grain Alliance.

Establishing direct sales channels will help Ukrainian agribusiness to get a fair price for exporting products abroad. “This is very important during the period of political and economic instability in Ukraine,” say well-known experts in agribusiness. Membership in international associations for Ukrainian agribusiness is a prospect of new ties, work at new markets with new customers. Any association is a concentration of people working in the field, the exchange of contacts with these people and their companies and the opening of new opportunities and potential, – stresses the chairman of the Committee of economists of Ukraine Andriy Novak.